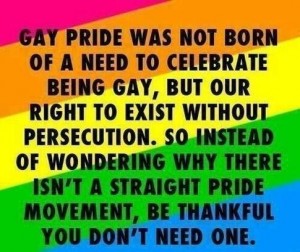 Nationwide June is synonymous with Pride month: the one month of the year where we, the LGBTQIA+ community get to celebrate their story. The month where we get to honor the trailblazers that were hung, humiliated, imprisoned and suffered great deals so that we can have the shred of equality that we do. It’s also the month where we get to reflect on how much more we still need to do, especially for those of us most marginalized. So why am I already seeing posts with cishet folks (mainly men) crying, “Where’s Straight Pride?” Being straight is a part of the everyday fabric that each of us has to navigate – it’s everywhere in society – some would say it’s pervasive, even. So let me offer up 20 reasons why “Straight Pride” is not a thing, won’t ever be a thing, and it utterly offensive to the existence of any marginalized community, but especially the LGBTQIA+ community.

So when someone posts about straight pride: be an ally and tell them why straight pride is not, nor will it ever be a thing. Ever. When you see this type of language and thoughts squash them. June may be Pride month, but that doesn’t mean we don’t think about Pride every single day of every single month of every single year. We’re LGBTQIA+ every day, all day long. All. The. Time.

November 24, 1999, the day before Thanksgiving I came out to my mom. She was the very first person in my family that heard the words, “I am gay.” The second was my father, then my brother. The next day I celebrated Thanksgiving with my family, and that weekend I decided to tell my entire family. I took a trip to their homes and shared my news. Overall, it was well received except for a few people – but that is not why I am writing this, I am writing this for a different reason.

When I came out at 17 I was young, naïve and pretty blind – like most young people in their time. I was fortunate that I had an incredible network at college that supported me and educated me. In fact, I was blessed with a “gay mom” who really showed me the ropes…and by “ropes” don’t let your mind wander and think in the gutter: I’m talking about our herstory. The herstory of the LGBTQIA+ community, who they are, why we are who we are and how we use (or should use) our herstory to make advanced to the future. Oh, and how current issues often overlook actual herstory in a way to control what people actually remember. But some stories and people just cannot be erased.

As Pride month rapidly approaches it reminds me that our herstory is diverse. Our herstory is rich. Our herstory is more than just one group of us. Our herstory must pay tribute to, and honor all of the people that helped pave the way to today. Each year in June “the gays” (that’s community colloquialism purposely used) congregate all month and celebrate. Marches occur around the country (and globe) and people remember the plight of the community – but do they? They remember the tragedies that we’ve faced: from the uprising at Stonewall In, the AIDS crisis and the downright discriminating practices that are still seen in today’s America. But this year is something special: it’s the 50th anniversary of the Stonewall Riots, the riots that sparked the modern LGBTQIA+ movements – or as some call it, “The Gay Rights/Liberation Movement.” But what does everyone know about those riots? Was this the first of it’s kind? Who was there? Was it just gay people? Who is remembered? Who actually rose up to help [continue to] pave the path that folks like me, a white cis-gay male, and others get to walk every single day? Let’s take a brief walk through herstory up until 1969: aka “the real herstory.”

1895: The Cercle Hermaphrodites came together in New York to unite the androgyne community.
1924: The Society for Human Rights was founded by Henry Gerber, a gay man, as a gay organization.
1950: Mattachine Society created for gay males.
1956: Daughters of Bilitis created for lesbians.
1963: Bayard Rustin organized a March on Washington, an openly gay man working alongside Dr. King.
1965: Dewey’s Lunch Counter Sit In that included lesbian, gay and trans people of color.
1966: Transgender Riots at Compton’s Cafeteria.
1969: The Stonewall Riots in New York City – but who was there?

Let’s take a closer look at some omitted facts about what actually happened in 1969 at The Stonewall Inn:

If it weren’t for trans people, drag queens and gender nonconforming individuals that were there alongside the gay and lesbians, today would not be what it is…and while today is far from perfect, organizations like GLAAD, Lambda Legal Defense and the Sylvia Rivera Law Project would likely not exist. So why is this important in today’s LGBTQIA+ environment? Because of the following:

So this June, as we celebrate the 50th anniversary of the Stonewall Riots don’t forget all of the people who have affected queer herstory that’s led to this moment. Let’s honor them all, but most of all, let’s not forget those that are still, to this day, the most marginalized of our community. So long as their rights are being persecuted while also being dehumanized and murdered on the streets, we are not all equal. Floating in and out of privilege should not be an option. Our community is the way it is because of the most marginalized; forgetting them, who they are, forgetting their humanity and the monumental role they played in our herstory is nothing short of supporting those that seek to oppress. We are stronger together, our collective herstory shows that. Now let’s honor that and act on it.